Motivation is a fire from within. If someone else tries to light that fire under you, chances are it will burn very briefly
Oct 17, 2014, 2:56 pm ISTInspirational StoriesSarita Pant 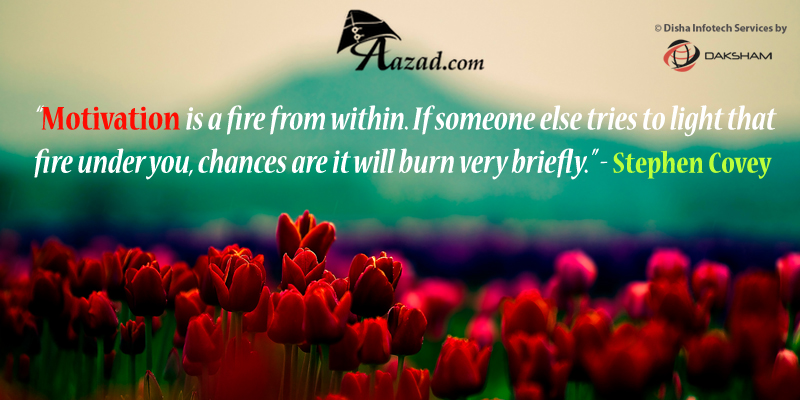 Once a small boy practice football regularly, But never played for his team. While the practice session moving on., his father would like to watch him far away from the filed on the bench and waiting for the end of practice session of his son.

Incidentlly, he was not seen on the field for consecutive four days and after a day, during the finals he went to coach and said "Coach, I will not be subsitute today and want to play in the match". The coach replied i am sorry , I can't allow because its a big match today for me and our team.
however, boy able to "beg" the permission and replied "Sir, I will not let you down".
Coach replied "I have put a aside my best decision on you, show your strength today".

Match started and coach see's the boy was unstoppable . He fired the ground and every opportunity was a damm goal. He get through the expactation  of coach and finally,a good news for his team won the game.

After, the game coach went and said, "boy,this was my best decision today, I realised and you were that which i have never seen before".
What happened why this magical game we saw today . the boy replied with ought expression ,"Coach,My father is watching me today".

Coach turn around the field and watch at the sight where his father used to sit but,"unfortunately the bench was empty". he said "Son,there is no one on the bench that i saw".

The boy's replied  muzzled the expression of coach , "One truth, my father was blind . Just four days before he died.
Today, is first match he saw playing me from above".
Which motivation works ? --a SELF BELIEF