Born on November 14, 1469 in present day Nankana Sahib (Pakistani State of Punjab), Shri Guru Nanak Sahab was the founder of Sikhism and the first of the 10 Sikh Gurus.
Oct 18, 2016, 5:16 pm ISTIndiansAazad Staff 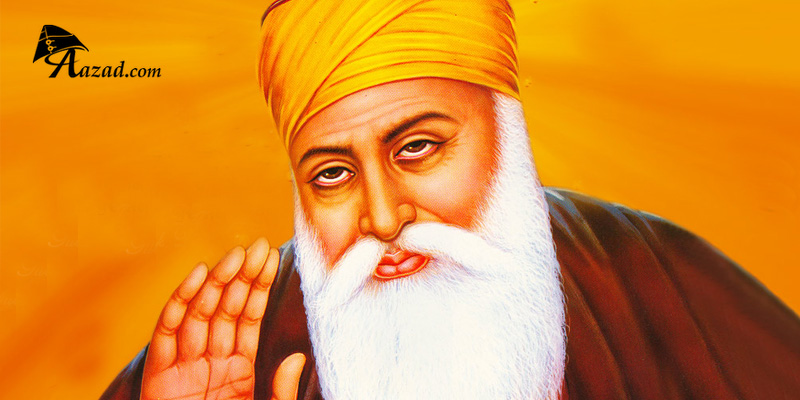 It was the month of Baisakh, in the village of Talwandi in Punjab (Pakistan), on 14th November, Mehta Kalu and Mata Tripta were blessed with a son named Nanak Rai.

Nanak was their second child and his sister Bebe Nanakiwas was 5 years older than him. His father was popularly known as Mehta Kalu and was a village patwari, a revenue official who belonged to the merchant caste.

Nanak was an extraordinary child with an acute power of observation and maturity far beyond his years. He grew up to be a gentle genial child with a quiet contemplated sight to his nature. Young Nanak had a beautiful voice and while singing he would often go into trance and compose hymns in praise of god.

His devotional songs known as Shabad always captured the imagination of the people. They were profound thoughts behind the simple words while lyrical phrases and exquisite melodies delighted the listeners. Nanaki was one of the earliest to recognize the extraordinary qualities of her brother. The other was Rai Bular, the Muslim chielf of the village who was amazed at how thoughtful and perceptive the boy was. Mehta Kalu, however, was puzzled and disturbed by his unusual child. Nanak was 7 when he was sent to a village school. He learned to read and write quickly. Besides the regional languages, he also learnt Persian and Arabic.

In September 1487, Sri Guru Nanak Dev Ji got married to Mata Sulakkhani. The couple had two sons, Sri Chand (Born in 1491) and Lakhmi Chand (Born in 1496). After a while, Nanak's father realized that wife and children didn't make any difference to Nanak's attitude to life. He remained just as detached, absorbed in meditation and in search for knowledge. There were times when he was silent for days, eating little and staying awake at night. Nanak's family was convinced that he was ill. Nanak's father called a Hakim, a local physician, but after meeting Nanak, the Hakim assured Nanak's parents that they should not be anxious as they had a truly great being among them and there was nothing wrong with Nanak.

Nanak's father wanted him to become responsible and start earning a living. Once Nanak's father instructed him to go to the market and buy goods and sell them in the village for a profit. Bala, a family servant was sent along with Nanak. On his way to the market, Nanak met a group of holy men and started a conversation with them. When he learnt that they had not eaten for days, he immediately bought groceries for them and gave them the rest of the money for them to buy clothes and happily wandered home empty handed. As Nanak reached the outskirts of his Talwandi, Nanak was in a dilemma. How was he going to explain to his father what he had done. He sat under the tree wondering what to do.  The news reached Mehta Kalu and he came rushing and demanded an explanation from Nanak. Nanak said "Father, you had asked me to make a profitable bargain, a saccha sauda, what better profit could one have in this world and in the next than by feeding the poor and holy!". Mehta Kalu, however was agitated and unhappy with Nanak's explanation. Rai Bular had to intervene to calm him down. At this time, Nanaki (Nanak's sister) and her husband Jairam came to Talmandi. Jairam was a steward in the house of the Governer of Sultanpur. Nawab Daulat Khan Lodhi, understand the situation, offered Nanak the charge of the stores, a job that needed great honest and hard work. While talking to Nanak, the astute Nawab had perceived these qualities in him. Nanak got adjusted in his new life and was soon joined by Mardana, Nanak's childhood friend from Sultanpur. Mardana was muslim and a gifted Rabab player and accompanied Nanak when he sang his hymms. Nawab Daulat Khan Lodhi was very pleased with Nanak's work as Nanak kept records with meticulous care. Nanak sent a part of his earnings home and his house was open to everyone, where the poor and the needy were always welcome. Nanak seemed to have finally settled down.

It is believed that Nanak worked at Sultanpur for about 3 years and his days were divided between his work and prayers. Every free moments in the morning and evening were spent in meditation and singing with Mardana and slowly a congregation of people grew around him.

One morning, as usual, Nanak and Mardana went to the river for their bath. Nanak plunged into the water, but to Mardana's surprise, he did not emerge again. After waiting for a while, Mardana went back to town and desperately called for help to have the best divers to search for Nanak in the river. People came running out of their home and the news also reached the Nawab, but Nanak was nowhere to be found. Finally, people came to a sad conclusion that Nanak had drowned and that his body was carried away by the river. After some days, Nanak reappeared. People were stunned to see him. Nanak did not utter a word for a while and after some time he finally broke his silence by stating "There is no Hindu, There is no Muslim". Nanak was a spiritually transformed man. He was no longer the dreamy eyed youth from Talwandi. He was Guru Nanak, a man with a mission to propagate God's name and the virtues of truthfulness and honest living. However, Nanak's statement "there is no Hindi, no musalman" did not go down too well with the Qazi of Sultanpur. Qazi complained to the Governor Daulat Khan Lodhi and Nanak was summoned to the governor's court. Qazi told Nanak that if he felt that there was no Hindi and no Muslim, then he shouldn't have any problem to go to the mosque with him and offer prayers. Nanak agreed and Qazi was surprised by this. Nanak went with the Qazi and Daulat Khan to a nearby mosque. While Qazi and Daulat Khan started offering their Namaz, Nanak didn't join them. Nanak sat in the mosque observing them. After finishing their prayers, Qazi questioned Nanak as to why did he not join them for Namaz. Nanak replied "while you were praying, your mind was on a new born filly left untied near a ramp and you were worried that the filly would fall". Nanak turned to Daulat Khan and said "while you were offering Namaz, you were dreaming of buying horses in Kabul, this is not true prayer". Both Qazi and Daulat were stunned to hear the truth from Nanak. Nanak had chosen the life of a teacher. Nanak and Mardana gave up their jobs. In this new phase of life, Nanak embarked on a journey across the land. For two people traveling on foot, he and Mardana covered amazing distances, through hills and forests, crossing rivers, stopping at villages, hamlets and towns. Everywhere Guru Nanak chose to stay with the poor, gathering people around him to spread his message.

In his lifetime, Guru Nanak went on many long journeys, called Udaasis. The first Udaasi was eastward from Sultanpur to Delhi from where he visited Haridwar and then went on to Ayodhya, Allahabad and Banaras. This eastward travel ended in distant Assam. And then they moved Southward, crossing present-day Bangladesh.  Moving Southward, Guru Nanak and Mardana came to the famous Jagannath temple at Puri. He went deeper south of India to various temples and even visited Sri Lanka. The first Udaasi lasted 12 long years and then they returned to Talwandi as Mardana was homesick.  Later Guru Nanak went on a journey to Afghanistan and Middle East to spread his message. On his return to Punjab in the early 16th century, Nanak found Punjab to be invaded by the Mughal invader  Baabar. Guru Nanak's followers kept increasing and decided to end his travel as he and Mardana were growing old. One of his disciples gifted Nanak a large piece of land by the banks of the river Ravi. Here Nanak established a township named Kartarpur. He gave up the garb of a wandering preacher and again became a farmer, living with his wife and children in Kartarpur.  Guru Nanak created an ideal of community living based on "Do good work, Share what you earn and Recite the name of God". Kartarpur was a caste-less society and a truly revolutionary experiment for the times. Everyone worked in the fields together, wore the same type of clothes, stayed in similar homes and as there was a common kitchen, they all ate together.  The Langar at the Gurudwara follow this tradition as nothing symbolizes true equality better than sharing a meal.

At Kartarpur, Guru Nanak found gained a new disciple and Nanak chose him as his new successor, naming him Angad. It was in the early hours of 22nd September,1539 when Guru Nanak closed his eyes in eternal sleep. He remains revered and beloved of all.

Do watch this documentary on the life of Shri Guru Nanak Dev Ji. 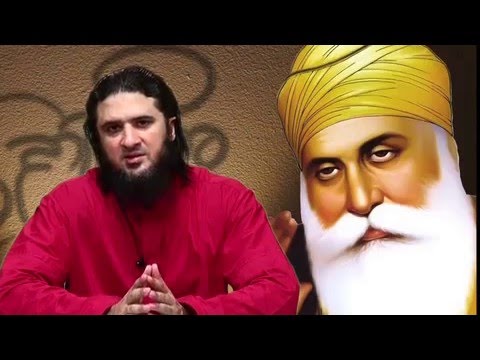