Get ready to witness the battle of the beasts as Amazon Prime Video announces the digital premiere of Godzilla vs. Kong in Hindi, Tamil and Telugu this August 14 th

Get ready to witness the battle of the beasts as Amazon Prime Video announces the digital premiere of Godzilla vs. Kong in Hindi, Tamil and Telugu this August 14 th

After receiving rave reviews from across the world, Godzilla vs. Kong is all set for its digital premiere on Amazon Prime Video in English as well as three Indian languages including Hindi, Tamil and Telugu
Jul 23, 2021, 3:27 pm ISTEntertainmentAazad Staff 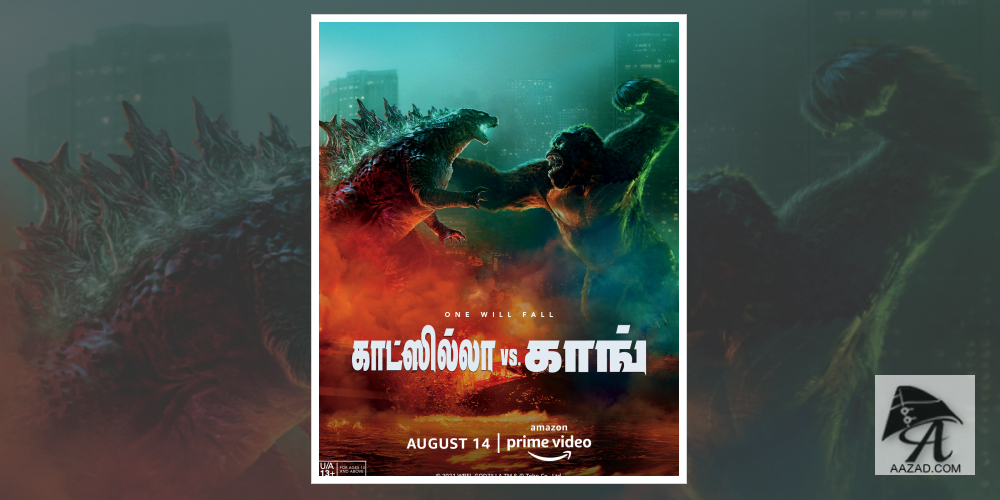 Amazon Prime Video today announced the release date for the highly- anticipated Millie Bobby Brown and Alexander Skasgard-starrer, Godzilla vs. Kong, on the service starting August 14, 2021. Along with the original language English, the film will be dubbed in three Indian languages, namely Hindi, Tamil and Telugu.

Directed by Adam Wingard, the film also stars Rebecca Hall, Brian Tyree Henry, Shun Oguri, Eiza González, Julian Dennison, Lance Reddick, Kyle Chandler, and Demián Bichir in pivotal roles. A sequel to Kong: Skull Island (2017) and Godzilla: King of the Monsters (2019), Godzilla vs. Kong is the 12th film in the King Kong franchise and the 36th film in the Godzilla franchise. The epic film pits two of the greatest icons of the Monsterverse, The Godzilla and the Kong against each other with humanity caught in the balance.

Talking about the legendary clash between these icons, director Adam Wingard says, "This is a battle that hasn't been waged since 1962, so for us, it was like, it's gotta be the most definitive version and the most satisfying version of these two monsters coming together. In doing that and knowing that everybody has got their favourite, we had to ensure to satisfy both their supporters. They both have their unique special powers and weaknesses...so that's all taken into consideration. For us, it was most important that this is the most epic battle of all time."

The movie focuses on Kong and his protectors, who undertake a perilous journey to find his true home, and with them is Jia, a young orphaned girl with whom he has formed a unique and powerful bond. They, however, unexpectedly find themselves in the path of an enraged Godzilla, cutting a swath of destruction across the globe.

Godzilla vs. Kong is produced by Warner Bros. Pictures and Legendary Entertainment. Watch trailer: https://www.instagram.com/tv/CRqOHPpNgtJ/?utm_medium=copy_link Godzilla vs. Kong will join the thousands of TV shows and movies in the Prime Video catalogue, including India produced Amazon Original series such as Mirzapur Season 1 and 2, Pataal Lok, Bandish Bandits and Made In Heaven, and award winning and critically acclaimed global Amazon Original series including Tom Clancy’s Jack Ryan, Good Omens, The Grand Tour, Homecoming and The Marvelous Mrs. Maisel, all on Prime Video, which is available at no extra cost for Amazon Prime members.

Prime members will be able to watch Godzilla vs. Kong anywhere and anytime on the Prime Video app for smart TVs, mobile devices, Fire TV, Fire TV stick, Fire tablets, Apple TV, Jio TV and stream online. In the Prime Video app, Prime members can download episodes on their mobile devices and tablets and watch anywhere offline at no additional cost. Prime Video is available in India at no extra cost to a Prime membership for just 999 per year; new customers can find out more at www.amazon.in/prime and subscribe to a free 30-day trial.